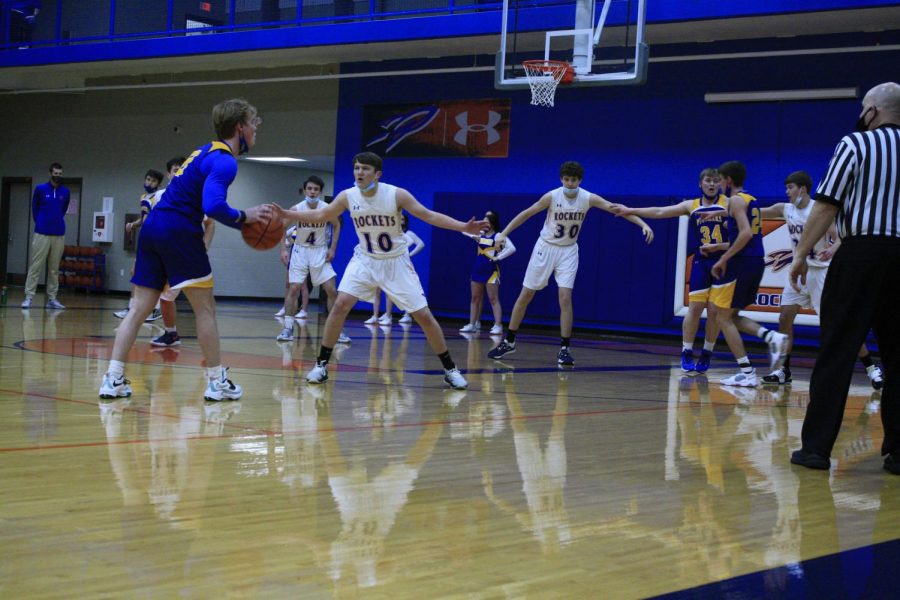 The Rockets opened up their season with the 2021 Kaskaskian Classic Tournament in Carlyle.  Their first game was against the Pinckneyville Panthers on Saturday, November 27.  Pinckneyville came out strong to lead the first quarter 20-8.  The Panthers continued to pull ahead, and the Rockets were down 12-33 at halftime.  At the end of the third quarter, the Rockets were still behind 22-48.  The Rockets outscored the Panthers in the fourth quarter 9-4, but it was not enough to take the win resulting in a 31-52 loss for the Rockets.  Ethan Riechmann led the Rockets scoring 17 points.

On Tuesday, November 30, the Rockets played their second pool game against the Nokomis Redskins.  Once again the Rockets were behind after the first quarter 9-16.  At halftime, Nokomis led 36-19.  The Redskins came out scoring in the third quarter extending their lead 49-23.  The Rockets fell to Nokomis 29-54 bringing their record to 0-2.  Dillon Teter led the Rockets in scoring with 10 points.

The Rockets placed 4th in their pool with a record of 0-3.  They would play the other pool’s 4 seed, the Woodlawn Cardinals, for the 7th place position.  After a very close and competitive first quarter, the Rockets trailed the Cardinals 8-9.  The Rockets came out hot in the 2nd quarter, taking the lead going into halftime 16-15.  Okawville kept the one-point lead in the third quarter with a score of 27-26 at the end of the third.  Woodlawn and Okawville were back and forth in the fourth quarter, but with a last-second shot by the Cardinals, the Rockets fell short one point 30-31 to Woodlawn.  Ethan Riechmann had a great offensive game with 16 points.

The Okawville Rockets went 0-4 in the Kaskaskian Tournament, facing good competition.  The Rockets will open their regular season on December 7 against the Trico Pioneers in the O’Rena.  Good luck to the Rockets as they begin their season!